Apendix is a worm shaped tubular structure found attached to the ceacum just below the ileocecal junction in humans, some apes and wombats. It’s inflammation is the most common disease of the appendix which leads to appendectomy; the most common emergency operation throughout the world. It’s different positions are responsible for different clinical presentation apart from common symptoms and on top of that a long subhepatic appendix can further confuse the picture and produce a diagnostic dilemma. Hence a good clinical acumen and a high index of suspicion are required to lower the morbidity and mortality associated with a delayed diagnosis of acute appendicitis.

The vermiform appendix is a tubular structure found attached to the ceacum in human beings. Some consider it to be a vestigial organ in humans while others say it is a lymphoid organ but it’s inflammation can lead to acute appendicitis which is a surgical emergency. Appendectomy is the most common emergency surgery performed worldwide. The mortality rate was as high as 67% in 1886 but now it is reported to be less than 1%. Thanks to the better antibiotics and advances in surgery [1,2]. The appendix can be from 1 cm to 30 cm in length but usually it is from 6 to 9 cm in length. The position of appendix can be retrocecal, Pelvic, Subcecal, Paracecal, Preileal or Postileal, which can produce a varied picture in the clinical presentation [3].

We report a case of 32 yr. old male who presented to the emergency department with a pain in the right iliac fossa and lumbar area. The patient complained of fever, nausea and loss of apetite. There was no history of migration of pain, no history of dysuria. The ultrasound of the abdomen was normal. The x-ray of the abdomen showed no significant air fluid levels. There was no free gas under the diaphragm in chest x- ray. The total leucocyte count was 13000 per mm3 with neutrophil count of 72%. Serum bilirubin was slightly raised (1.7 mg/dl). On examination there was deep tenderness in the right iliac fossa and lumbar area. The pain increased on hyper extending the hip joint. So the diagnosis of acute appendicitis was made and patient was taken up for surgery. The appendix was retroceacal and reached upto the hepatic flexure just below the liver. It was turgid and inflamed and measured slightly over 15 cm. The histopathological examination of the specimen confirmed the diagnosis. The patient made an uneventful recovery and was discharged on fourth post-operative day to be followed on outpatient bases.

The appendix is a worm like tubular structure containing mucosa, submucosa, muscular layer and serosa, present just below the junction of ileum with ceacum in primates, some apes and wombats [4,5]. In lower animals it is known to help in the digestion of cellulose but exact role of appendix in humans is not clear. some believe it is a vestigeal organ while some believe it is a lymphoid organ. It is believed to serve as a nidus for the gut friendly bacteria [6]. The differential development of the ceacum is responsible for the different positions of the appendix. Most common position of the appendix is retrocecal followed by pelvic, paracecal, subcecal, pre ileal and post ileal. The appendix is usually 6-9 cm long but the different apendices has been reported from 1 cm to 30 cm in length [3] Acute appendicitis is the most common disease of the appendix and appendectomy is probably the most common operation performed in emergency. It’s incidence is greatest between the ages of 10 to 30 year age group [7]. The Alvarado score is the most common assessment tool used for diagnosing acute appendicitis [8,9]. Ultrasound and CT-Scan of the abdomen can aid in the diagnosis [5,10]. Different positions of the appendix can produce some confusing picture. like pelvic apendix can irritate the ureter and can present like urinary tract infection or it can result in diarrhoea if it irritates the rectum. Hyperextension of the hip joint can aggravate the pain in retrocecal appendicitis however the typical tenderness and rigidity may be absent in right iliac fossa. The post ileal appendix may present with pain just to the right of the umblicus whereas the typical right iliac fossa pain may be absent. In children appendicitis may be confused with gastroenteritis, meckel’s diverticulitis or intussusception. The diagnosis may be delayed hence the children and infants may present with peritonitis. It is difficult to elicit tenderness in obese patients. The elderly patients can present with gangrenous appendix. In pregnant females the symptoms may be referred to pregnancy and the delay in diagnosis can lead to fetal loss. Other differential diagnosis in females could be pelvic inflammatory disease, torsion of ovary, ruptured ectopic pregnancy and Mittelschmerz [9]. The most common cause of acute appendicitis is obstruction caused by fecolith. Other causes could be lymphoid hyperplasia, tumor, worms, or seeds [2]. The term appendicitis was coined by Reginald Fitz but first documented apendicectomy was by kronlein in 1886.The most famous work on appendicitis was by Charles Mcburney who described the position of the base of the appendix. In his paper in 1894 he described the incision for appendicectomy. Kurt Semm performed the first laparoscopic appendicectomy in 1982 [11]. The longest reported appendix removed from a living person has been 26 cm. Other reports have been of 20.5 cm, and 17 cm long appendix. Another 28 cm long apendix has been reported to be removed from a cadaver [12]. We are reporting one of the longest appendices removed at surgery in India which was just over 15 cm in length (Figure 1). 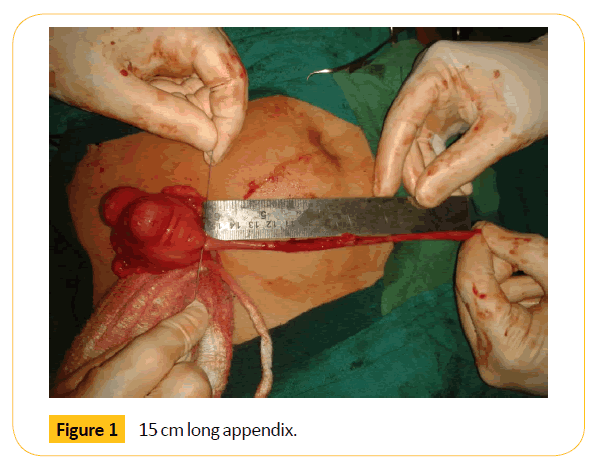 Acute appendicitis is the most common disease state of the appendix. Appendectomy is most common emergency operation performed worldwide. It’s unusual to find long appendices in adults. Furthermore the retrocecal position of the appendix can make the diagnosis of acute appendicitis a really difficult one and hence the delay in treatment can increase the morbidity and mortality. Hence a high index of suspicion and good clinical acumen is required to make a diagnosis of acute appendicitis.

Written informed consent was obtained from the patient for publication of this Case Report and any accompanying images. A copy of the written consent is available for review by the Editorin- Chief of this journal.

Rajesh Chaudhary: Contributed substantially to the Conception and design,

Acquisition of data, Analysis and interpretation of

Amar Verma: Contributed substantially to the Conception and design, Acquisition of data, Analysis and interpretation of

Ankit shukla: Contributed substantially to the Conception and design, Acquisition of data, Analysis and interpretation of

Atul Gupta: Contributed substantially to the Conception and design, Acquisition of data, Analysis and interpretation of