Endoscopic retrograde cholangiopancreatography (ERCP) has a vital role in the diagnosis and management of various biliary and pancreatic diseases but is also associated with adverse events. Commonly seen complications are pancreatitis, bleeding, cholangitis, cholecystitis, postspinchterotomy strictures and perforation. Migration of stents, which is more with plastic stents, is a well-known complication of endoscopic retrograde cholangiopancreatography however less than one percent of migrated stents end up in intestinal perforation. Moreover perforation of the ileum years after migration of ERCP stent is hardly heard off. The literature also reports very few cases of small bowel perforation by migration of biliary stents.

Since the inception of Endoscopic retrograde cholangiopancreatography in 1968 it has become a routinely performed procedure and evolved as a therapeutic intervention for various biliary and pancreatic pathologies [1]. Commonly encountered complications of ERCP are pancreatitis, bleeding, cholangitis, cholecystitis, postspinchterotomy strictures and perforation. Mostly perforation occurs in bile duct, periampullary region, duodenum, esophagus and afferent limb of Billroth II anastomosis. The literature documents the rate of perforation of common bile duct, pancreatic duct or duodenum after ERCP to be approximately one percent [2]. Mostly the migrated stents pass out in feces rarely leading to complications, however a very few of them lead to perforation of duodenal (most common), sigmoid and rarely ileal. Risk factors for ERCP related perforations are difficult to predict due to scarcity of cases. Perforation in patients undergoing therapeutic ERCP can cause significant morbidity and mortality. Management of these patients depends on severity and location of perforation ranging from conservative to surgical intervention. Our case is an extremely rare case years after therapeutic ERCP stenting, with migration of bile duct stent leading to acute peritonitis due to dual perforation of small bowel, diagnosed intraoperatively.

A 58 year old lady presented to the emergency with complaints of pain around umbilicus since five days, which was sudden in onset, severe and then became diffuse to whole of the abdomen. Pain increased on moving was without any radiation and associated with one episode of bilious vomiting. There was history of episodes of pain abdomen in the past which got relieved by drugs. Previous history included open cholecystectomy followed by biliary endoscopic intervention ten years back details of which patient was unable to provide. Patient was on regular antihypertensive drugs since last one year. On examination patient was febrile and had tachycardia with blood pressure of 110/70 mm of Hg. Abdominal examination revealed diffuse tenderness, guarding and rebound tenderness with absent bowel sounds. Digital rectal examination did not reveal any abnormality. Laboratory studies revealed leucocytosis and slightly raised creatinine and blood urea nitrogen levels. Chest radiograph revealed free gas under diaphragm suggestive of hollow viscus perforation. USG abdomen was suggestive of moderate amount of free fluid in the abdominal cavity.

A diagnosis of acute generalized peritonitis due to perforation of hollow viscus was made and patient was taken for exploration after resuscitation. Upon exploration around 300 ml of dirty bilious fluid was suctioned there were fibrin flakes over the ileum which was adherent to its adjacent mesentery and bowel. On further exploration a hard tubular structure approximately 10 cm was palpable in the lumen of the ileum. This structure was found to be perforating the ileum from both of its ends and entering beneath the adjacent mesentery (Figure 1). On retrieving it from the bowel it was found to be the ERCP stent (Figure 2). Perforations were closed after thorough toileting and freshening the margins. Patient’s recovery was uneventful and she was discharged on eighth postoperative day. 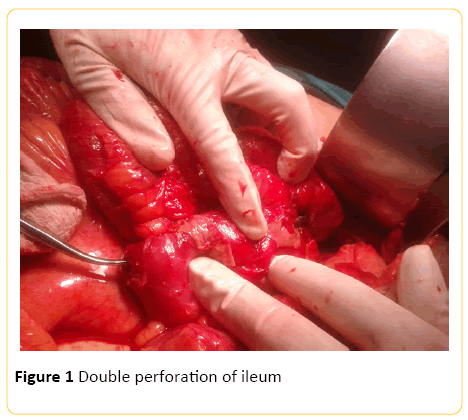 Soehendra and Reynders were the first in 1980 to use new endoscopic technique of biliary drainage using plastic stent [3]. Since then a routinely done therapeutic procedure is amongst the most challenging, invasive and dangerous intervention with a long learning curve for the gastrointestinal endoscopists. This valuable intervention is not free from hazards and is associated with serious complications and can even lead to death in some cases [4]. The recent literature reviews report the incidence of 0.3% to 1.3% perforation following ERCP [2,5,6]. One of the largest reviews found 75 cases of perforations following ERCP out of 12,427 cases [2].

Classification of perforation after ERCP is mainly divided into three types: (a) perforation with guidewire (b) perforation in the periampullary region following sphincterectomy and (c) perforation of the lumen far away from the papilla [7]. Migrated stents leading to perforation of the bowel is one of the known mechanisms usually proximal to ligament of treitz and rarely beyond it. Another way of classifying ERCP related complications is according to the time of detection of complication: short term which is detected within 3 days of intervention and long term which is detected after 3 days of intervention [8]. Various risk factor leading to increased incidence of perforation have been identified which include sphincterotomy, ERCP after Billroth II (due to altered anatomy), biliary stricture dilatation, sphincter of oddi dysfunction, intramural injection of contrast and prolonged time to accomplish the procedure [2]. Risk factors for migration of stent are benign disease, plastic stent, sphincterotomy and improper insertion [9,10].

Most of the cases of perforation occur during therapeutic ERCP with maximum incidence reported in study due to guide wire related manipulations (32%) followed by sphincterotomy (15%), stent insertion (9%), and dilatation of strictures (7%) [9]. Approximately 10% of the placed stents migrate and usually migrated stents pass out in feces rarely leading to complications, whereas less than 1% cause perforation of duodenal (most common), sigmoid perforation and rarely ileal perforations [10]. For prevention of migration of stents they are placed beyond the sphincter of oddi and replaced at regular intervals.

Accurate clinical assessment and abdominal CT scan with oral contrast are of utmost importance in identifying the cause of perforation. Post ERCP free gas is seen in about 13-29% of cases who remain asymptomatic and it is not a recommended criteria for surgical intervention [11]. Treatment of the patient following ERCP perforation is dictated by site, clinical picture, severity and radiological imaging. Bowel wall perforation leading to peritonitis demands urgent surgical intervention however small localized retroperitoneal leaks are usually dealt conservatively. Endoscopic retrieval of the migrated stents and closure of perforation with clips endoscopically is an alluring option [12]. Percutaneous removal of the stent distal to ligament of treitz in the absence of peritonitis and sepsis is worth a modality but yet to be explored [13].

ERCP in today’s era has a major role in the diagnosis and management of various biliary and pancreatic diseases but is also accompanied with complications. Thorough knowledge of the complications related to ERCP is essential for early recognition, timely management and reduction of associated morbidity and mortality. Perforation is not a frequent complication of biliary stenting and cases of stent migration causing duodenal, sigmoid and afferent limb of jejunum perforations have been reported but perforation of the ileum ten years after ERCP procedure is hardly heard off. Usually the stents are removed within three months however cases demanding long term biliary stents should be closely followed. Patients of acute abdomen with associated history of biliary stenting can have stents as the culprit behind scenes necessitating surgeons to be watchful and mindful.

The authors declare that there is no conflict of interest regarding the publication of this paper.

Financial disclosure none to report. Informed consent was obtained for this case report.